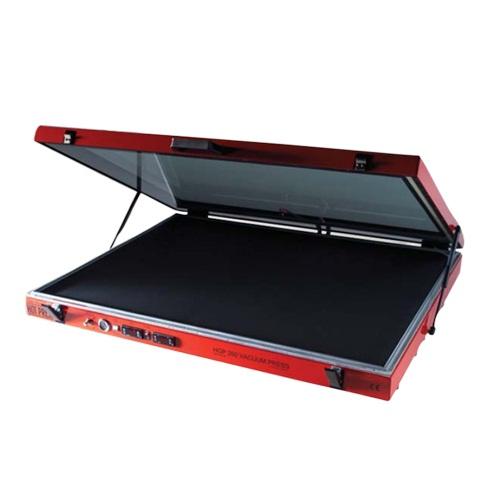 The Drytac 50.25" x 98.25" Hot Press Heated Glass Top Vacuum Press handles a wide range of presentation materials from foam board and wood to photos, art prints and delicate fabrics and is is well regarded by picture framers, photolabs, digital service bureaus and other finishing professionals for their ability to produce a very even spread of heat across the work surface, leading to a superior quality of surface finish. It features an automatic electronic timer with a manual override switch and vacuum pressure adjustment capabilities. Upon completion of the cycle, vacuum pressure is automatically released and the timer resets itself. The top panel of the Drytac 50.25" x 98.25" Hot Press Heated Glass Top Vacuum Press is made up of two sheets of reinforced tempered glass. The inner surface of the lower sheet has an invisible conductive film embedded in it. A controlled electric current is passed through this conductive film creating a highly efficient heating system. A sensor on the glass monitors and controls the temperature by means of a digital thermostat. The glass is extremely smooth and scratch resistant. The transparent top panel allows the operator to view materials during processing and correct mis-aligned work or folded back corners.

Drytac Hot Press Vacuum Press   Drytac Product Catalog 2017
▶
Am looking for a print on glass machine; can this be done with your product?
Asked by Valerie grant
Thank you for your question. This machine actually adheres or transfers prints onto other surfaces it DOES NOT print. So if you were trying to do glass you would print onto a PET film either white or clear and then this machine adheres it to the glass. Because of the pressure thin glass tends to crack.
Answered by MyBinding
4 years and 5 months ago ago