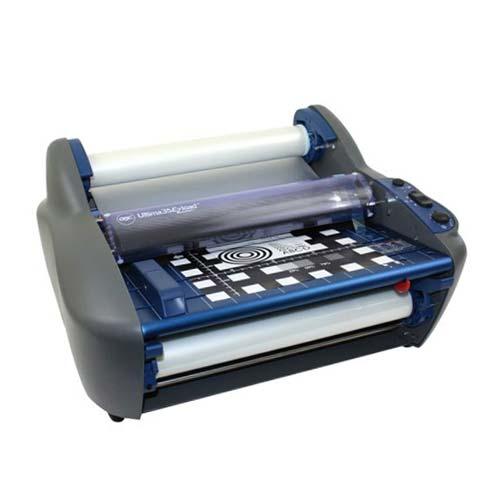 The GBC Ultima 35 was introduced to the laminating machine market as an answer to a couple of needs. First, it was designed to be a low-cost roll laminator that just about any business, church or school could afford. Second, they wanted to address the ongoing problem of users feeding roll laminators incorrectly and damaging their machines. Here we take a look at the Ultima 35 and list what we consider to be its strengths and weaknesses.

▶
Does this machine print only one side of the document? Or both?
Asked by Mercedes Tyler
This in not a printer, but is a laminator and yes is designed to run two rolls of film for full encapsulation.
Answered by MyBinding
2 years and 6 months ago ago
▶
how thick can the item being laminated be?
Asked by sandra
Thank you for your question. The GBC HeatSeal Ultima 35 EzLoad 12" Roll Laminator is designed to work with paper and card stock. It would now work with boards and thicker items.
Answered by MyBinding
4 years and 4 months ago ago
▶
Do you ship to Mexico?
Asked by Salvador Garcia Hernandez
Thank you for your question. We do ship internationally. If you put items in your cart and view the cart, you can enter your country and postal code to get the shipping cost. For international orders we only accept PayPal or wire transfer (there is a fee for wire transfers) as payment. For orders paid with PayPal, the order must ship to the shipping address associated with the PayPal account. All prices on the website are in US Dollars, for most accurate and up to date exchange rates please contact your financial institution. Please contact our customer service department directly if you need assistance placing the order and we would be happy to help.
Answered by MyBinding
4 years and 5 months ago ago
▶
I bought this machine and I really like it but it waste alot of laminating before the item gets to it. Is there anyway not to waste so much?
Asked by Vicki Taylor
Thank you for your question. Unfortunately with a roll laminator there tends to be a fair amount of waste if you are just laminating one piece at a time due to the "leading edge" coming off the roll. The most efficient way to laminate is in batches that way you can control the spacing between sheets and you only have that one "leading edge".
Answered by MyBinding
5 years and 10 months ago ago